Click HERE to watch the Book Trailer for Seaman!

The Story from History: Using a Primary Source as a Springboard for Writing 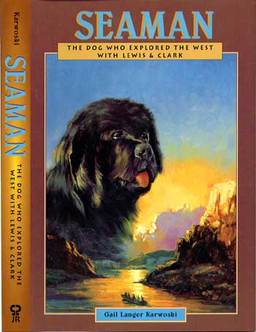 _ I. Writing Historical Fiction
What are the benefits of reading primary sources to learn about history?  The disadvantages?  Historians rely on primary sources, but these may be incomplete or hard to understand.

Read an excerpt from the Journals of Lewis and Clark. What details could you add to write a story based on this info? (Perhaps dialogue would help bring the scene to life? Or perhaps the characters' feelings would make the scene sound more “modern”? What about sensual details that describe the setting, such as smells or sounds?)

Read one of the following excerpts and compare it with the corresponding scene from the historical novel, Seaman, the Dog Who Explored the West with Lewis and Clark (Atlanta: Peachtree Publishers, 1999). What details did the author add or remove from the journal entry?

Use another journal entry as a prompt for kids to write their own historical fiction.

Excerpts from the Journals of Lewis and Clark

_(Note: The September 11 entry is the basis for the scene found on pages 7-10 of Seaman, the Dog Who Explored the West with Lewis and Clark.)

Set out about sunrise, passed Sunfish creek 1 mile &c &c entered the long reach, so called from the Ohio runing in strait direction for 18 miles in this reach there are 5 Islands from three to 2 miles in length each ---  observed a number of squirrels swiming the Ohio and universally passing from the W. to the East shore they appear to be making to the south; perhaps it may be mast or food which they are in serch of but I should reather suppose that it is climate which is their object as I find no difference in the quantity of mast on both sides of this river it being abundant on both except the beach nut which appears extreemly scarce this season, the walnuts and Hickory nuts the usual food of the squirrell appears in great abundance on either side of the river --- I made my dog take as many each day as I had occation for, they wer fat and I thought them when fryed a pleasent food --- many of these squirrils wer black, they swim very light on the water and make pretty good speed --- my dog was of the newfoundland breed very active strong and docile, he would take the squirel in the water kill them and swiming bring them in his mouth to the boat.
- Meriwether Lewis

(Note: The May 19 entry is the basis for the scene found on page 74 of Seaman, the Dog Who Explored the West with Lewis and Clark .)

The last night was disagreeably could; we were unable to set out untill 8 oclock A. M. in consequence of a heavy fogg, which obscured the river in such a manner that we could not see our way; this is the first we have experienced in any thing like so great a degree; there was also a fall of due last evening, which is the second we have experienced since we have entered this extensive open country. at eight we set out and proceeded as yesterday by means of the cord principally, the hills are high and the country similar to that of yesterday. Capt Clark walked on shore with two of the hunters and killed a brown bear; notwithstanding that it was shot through the heart it ran at it's usual pace near a quarter of a mile before it fell. one of the party wounded a beaver, and my dog as usual swam in to catch it; the beaver bit him through the hind leg and cut the artery; it was with great difficulty that I could stop the blood; I fear it will yet prove fatal to him.

(Note: The May 29 entry is the basis for the scene found on pages 79-80 of Seaman, the Dog Who Explored the West with Lewis and Clark .)

Last night we were all allarmed by a large buffaloe Bull, which swam over from the opposite shore and coming along side of the white perogue, climbed over it to land, he then alarmed ran up the bank in full speed directly towards the fires, and was within 18 inches of the heads of some of the men who lay sleeping before the centinel could allarm him or make him change his course, still more alarmed, he now took his direction immediately towards our lodge, passing between 4 fires and within a few inches of the heads of one  range of the men as they yet lay sleeping, when he came near the tent, my dog saved us by causing him to change his course a second time, which he did by turning a little to the right, and was quickly out of sight, leaving us by this time all in an uproar with our guns in or hands, enquiring of each other the case of the alarm, which after a few moments was explained by the centinel; we were happy to find no one hirt.  The next morning we found that the buffaloe in passing the perogue had trodden on a rifle, which belonged to Capt. Clark's black man, who had negligently left her in the perogue, the rifle was much bent, he had also broken the spindle, pivit, and shattered the stock of one of the bluntderbushes on board, with this damage I felt well content, happey indeed, that we had sustaned no further injury.

These excerpts are from The Journals of the Lewis and Clark Expedition, editor Gary E. Moulton ( Lincoln, Nebraska, and London:  University of Nebraska Press, 1983-1997).

II. Writing a Description of a Plant 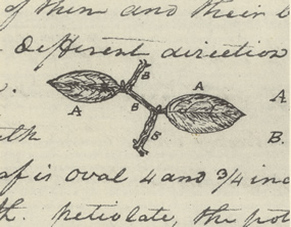 _During their expedition, Lewis and Clark encountered many plants and animals that were unknown to scientists living in the United States.  They sent home samples of many of their discoveries, and they described their findings in detailed notes and sketches. In this lesson, students will attempt to "capture in words" a plant that is found near their school.

Note: Before starting, the teacher should gather some leaves or a small branch from several plants. Identify the plants that each sample represents.

Share the following entry from the Journals of Lewis & Clark. How did the explorers describe the plant so that the scientists back in the United States could "see" the new species? Look for precision in describing color (What shade of green?), measurement (How many leaves on a stem? How large is a leaf?), as well as sensory details (How does the leaf smell?).

Divide kids into groups of 3-5. Give each group a plant sample to describe. Encourage the children to include enough detail so that a reader will be able to identify their plant from the description.

When all the groups have completed their descriptions, place each of the leaves/branches on a numbered paper, and display these on a table. Share the student-written descriptions. Have the groups examine the numbered samples and decide which description matches each plant.

Discuss which descriptions were the most successful, and why.

Using a field guide, read aloud a contemporary description of these plants.  How is this description different than the students' work?

Excerpt from The Journals of Lewis and Clark:

No. 27.  taken 4th of August, and furst observed at the bald prarie -- it is beatifull plant with a variagated leaf -- these leaves incompass the flowers which are small and in the center of them; at a small distance they resemble somewhat a white rose  the leaf near the large stem is green and is edged with white; they grow smaller and more numerous as they approach the flower or the extremity of the limb. the plant is much branched; the leaf is smoth on both sides and edge, of an ovate form and pale green colour, rises to five or six feet, is annual   at every point that it branches it has a pair of opposite leaves and from thee to four branches --
- Meriwether Lewis

(Note: This is a description of “snow-on-the-mountain,” Euphorbia Marginata)

This excerpt is from volume 3 of The Journals of the Lewis and Clark Expedition, ed. Gary E. Moulton (Lincoln, Nebraska, and London:  University of Nebraska Press, 1983-1997).

The Journals of Lewis and Clark:
http://lewisandclarkjournals.unl.edu/read/?_xmlsrc=lc.toc.xml&_xslsrc=LCstyles.xsl