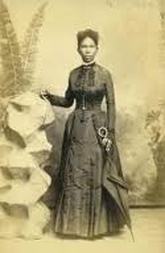 Savannah's Mother Mathilda will be honored as one of Georgia's 'Women of Achievement.'

The year was 1860, just before the Civil War. In Savannah, Mathilda Taylor Beasley was running a school for black children from her home. This was no ordinary endeavor. Her school met secretly. At the time, Georgia law forbade anyone from "teaching slaves or free persons of color to read," said Athens-area researcher and author Gail Langer Karwoski, who has studied Beasley's life for years.

According to the "slave laws," the punishment for teaching black children was "a fine and whipping." School records no longer exist, but, in the 1980s, Savannah nun Betty (Charlene) Walsh described the perils in a skit about Beasley for Black History Month. The fictional account opens in Beasley's kitchen, where she's welcoming her students.

"Warm yourselves by the stove," she says. "Were you careful coming through the yard?"

"Yes, ma'am. We know it would mean big trouble if white folks caught us comin' to learn any readin' and numbers."

Beasley knew the risks, but she was a determined woman.

She knew she was breaking the law, but she kept teaching.

Next month – about 150 years after Mother Beasley created her illegal school – she'll be honored by Wesleyan College in Macon. Calling Beasley "a courageous teacher," college officials have selected her as one of five Georgia Women of Achievement this year.

The March 11 ceremony will include speeches and a video about her life.

She'll join a list of 50 distinguished women, including Girl Scouts founder Juliette Gordon Low and author Flannery O'Connor, who have won this award.

"She taught students when it was dangerous for African-Americans to be taught," explained Women of Achievement's Executive Director Mary K. Roarabaugh. "She left a legacy for others to follow."

The award is also expected to bring Beasley national recognition.

And it guarantees Georgia school children will learn about her. Wesleyan distributes lesson plans to teachers about all its Women of Achievement, said Karwoski, who led the drive for Beasley's recognition.

Besides her work as a teacher, Beasley was also the state's first African-American nun. She organized the Sisters of the Third Order of St. Francis, a group of black Catholic nuns, in Savannah. She also started one of the first orphanages in the nation for African-American girls.

In addition to the ceremony at Wesleyan, Beasley will be honored Sunday at 11 a.m., with a special mass at Sacred Heart Church, where she once worked and worshipped. When Beasley was alive, the Savannah church was located on Habersham Street, but it has since moved to 1707 Bull Street.

The Wesleyan award is the latest of several honors for Beasley. In 1982, Chatham County Commissioners created an East Broad Street park and playground called Mother Matilda Beasley Park. (Historians are divided on the spelling of her first name.)

A national historic marker now stands near Sacred Heart Church that tells the story of "Mother Beasley, the first African-American sister in Georgia."

A life of worship and help

Beasley's induction as a Woman of Achievement follows years of lobbying by Savannah Catholic leaders and Karwoski, a children's book author and former teacher.

"I stumbled upon her" while doing research on African-American history, Karwoski said.

Karwoski used Beasley's secret school as the basis for a story of historical fiction in the 1996 book that she and Loretta Johnson Hammer co-authored, "The Tree that Owns Itself and Other Adventure Tales from Out of the Past."

According to information from Karwoski and documents from the Georgia Historical Society, Beasley was born in New Orleans in 1832, the daughter of a slave named Caroline and, some historians believe, a Native American. She moved to Savannah when she was a girl.

Here, she married a free black named Abraham Beasley, a wealthy restaurant and land owner. After his death in 1877, she donated his property – including land downtown, on Isle of Hope and on Skidaway Island – to the Catholic Church and started her orphanage.

The St. Francis Home for Colored Orphans was the first of its kind in Georgia, Karwoski said. Despite financial problems – as well as efforts by some mischievous orphan girls to burn the place down – it continued for decades.

She also travelled to London in the 1880s to serve as a novitiate for a year. She returned to Savannah to run the orphanage and created the first group of black nuns in the state.

In her later years, Mother Beasley lived in a cottage at Sacred Heart Church and continued working for the poor. She took in sewing and gave her earnings to poor blacks, Karwoski said.

At the age of 71, Beasley died alone in prayer in a chapel near her cottage. When she was found, she was wearing the simple, brown habit of her religious order and she was stretching her hands toward the statue of the Virgin Mary, the Savannah Morning News reported in a December 1903 story.

She died "an idol of the poor," the story said.

A century later, her supporters use similar words.

"She made a great impact for social justice and evangelism," said Rhonda Miller Williams, chairman of a Sacred Heart service group called the Mother Beasley Society.

The group holds masses to commemorate Mother Beasley and hopes to buy and restore the dilapidated wood-frame cottage on Price Street where Beasley spent her last days.

Williams has a simple goal — to keep the memory of an extraordinary woman alive.

After all, Williams said, "She stood up for what she believed."
Return to The Tree That Owns Itself