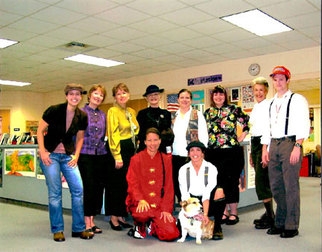 At Fort Clarke Middle School in Gainesville, Florida, Quake! was the focus of a remarkable unit - “one book, one school!”  Everybody joined the fun: That’s the Principal dressed as Jacob, with her dog as Quake. The Assistant Principal is dressed as San in the red satin outfit.

Fort Clarke Middle School united into a community of readers, with  the motto: "one school, one book." 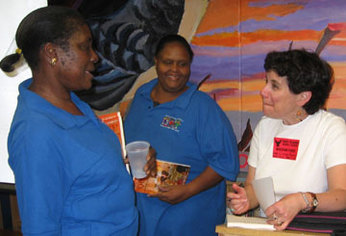 _Staff members got involved, too; they signed up to read chapters in classrooms. When I visited the school on “Quake Day,” the whole building “rocked” with excitement.  Everytime I walked down a hallway, I got stopped by a staff member; a secretary, a counselor, a janitor, or a lunchroom lady - like the two women in the photo - eager to tell me a special story about the day they shared “their” chapter with the kids!

The fun and learning didn’t stop with sharing the story .... Each teacher created a lesson plan to use “their” chapter in their curriculum - and the teachers shared their amazingly creative approaches. The science teachers taught about plate tectonics. The math teachers taught about the logarithmic Richter scale used for measuring the severity of earthquakes. In social studies, students traced the route that Jacob, San, and Quake walked on a map of the city. In music, students heard and analyzed a symphony written to commemorate the Great Disaster. In P.E., students created a “tent city,” like the one in Golden Gate Park where citizens lived after their houses were destroyed; the coaches even invited a local grocery store to donate food so they could create a real “bread line” for the students! During the unit, the lunchroom served earthquake foods, like squash casserole and rice-a-roni (“the San Francisco treat”).

On “Quake Day,” the school celebrated. I was only one of the special guest speakers who came for the day. Rescue workers from Alachua County Emergency Operations came, along with Red cross volunteers, and a search & rescue team - including their trained dogs. A geologist told students about the latest in earthquake science. An architect and an electrician talked about earthquake-safe buildings, and a microbiologist described the threat of disease after a disaster.

My Lesson Plans for Quake! Disaster in San Francisco, 1906

_A Note to the Teacher:
These 3 reproducible lesson plans may be used before, during, or after your reading of Quake! They were provided to help you extend your language arts lessons into social studies and science, as well as to enhance your students’ understanding of this event.

Background for the Teacher:
Earthquakes are caused by movements of the earth’s crustal (“tectonic”) plates - the major force that shapes our planet. Scientists estimate that small tremors happen every day – more than a million of them each year! Although larger quakes occur less frequently, an earthquake of magnitude 6 happens 2 or 3 times a week somewhere in the world. A magnitude 7 quake happens more than once a month. Since most of these quakes originate deep under the sea and far from population centers, they are hardly noticed by most people.

But earthquakes have always been part of human experience. In ancient times, people explained these frightening events with myths. Origin myths often involved gods who were punishing mankind for misdeeds. Sometimes these imaginative “explanations” took the form of legends about animals who lived underground.

A scientific explanation of earthquakes – the science of seismology – began to develop in the 1700’s. During the following century, one scientist recognized that earthquakes were actually waves passing through solids. Another scientist built the first electromagnetic seismograph, a device for measuring earthquake’s magnitude. Since that time, science has made great advances in understanding the cause of earthquakes and measuring their force.

Today, we understand that movements in the tectonic plates of the earth’s crust are the underlying cause of most earthquakes as well as volcanoes.

When the Earth Shakes … Legends from the World’s Cultures

Read aloud the earthquake scene in Quake! Disaster in San Francisco, 1906 (pages 23-25). Ask students how the earth’s movement is described. (“The street heaved and rolled, like the ocean during a storm. It was as though a giant sleeping below the cobblestones had suddenly decided to get up.”) Ask if any of the students have been in an earthquake or heard stories from friends or relatives about the experience. What did it feel like? Were they scared?

Tell students that before the science of seismology, people created myths and legends about why earthquakes happen. In fact, people have always responded to unknown forces that threaten death and destruction by creating origin stories. Ask students to speculate about why all cultures create such stories.

· In Greek mythology, earthquakes are the result of the god, Atlas, shrugging as he holds up the world.

· In ancient Rome, one writer suggested that earthquakes were the way the earth protested destructive mining practices.

· In ancient Japan, earthquakes were said to be the flopping of a giant catfish which lived in the mud inside the earth.

· One legend from India involves seven serpents who take turns holding up the earth; when one serpent passes the burden to another, a jolt is felt.

· In Siberia, people imagined a god driving a sled that held the earth; whenever the dogs pulling the sled scratch their fleas, the earth shakes.

· In the African country of Mozambique, the earth was considered a living being; earthquakes were the chills and fever whenever this earth being was ill.

· A New Zealand myth pictures portrays Mother Earth as a pregnant woman; when her fetus stretches and kicks, we have earthquakes.

Assign students to work alone or in pairs to go to the library or do an internet search to find other myths and legends. Share their research. Ask students why different cultures chose different animals to explain the movement caused by an earthquake. Do some of these origin myths offer a more cheerful outlook than others?

Have students write and illustrate an origin story. Encourage them to use terms and artistic details that reflect the culture that produced their story. Some students may wish to illustrate their myth/legend as a cartoon strip or write it in the form of a poem or song.

Display the student writing and art under a sign that reads, “When the Earth Shakes … Legends from the World’s Cultures.”

When the Earth Shakes … Science from Today’s World

Read aloud the “Author’s Note” at the end of the novel. Have students try the activities - make an “earthquake” with their hands, and trace the San Andreas fault line on a map of California. Using the background information in this guide, present the scientific explanation of earthquakes.

Encourage students to contribute current events to the class study of earthquakes. Tell them to be alert for newspaper clippings or TV reports about current earthquake activity.

Suggest that they try a “Google” search to find internet sites about the science of earthquakes. (Some helpful websites are listed in “Resources,” at the end of this teacher’s guide.) Many of these sites display photographs and interactive diagrams.

Display this question on the board/overhead: “Why does the earth shake?” Have students work in pairs to write paragraphs that answer the question in their own words. Encourage them to make colorful graphs, diagrams, or drawings to illustrate their ideas.

Display the students’ writing and art (as well as news clippings they’ve brought in to share) under a sign that reads, “When the Earth Shakes … Science from Today’s World.”

Read aloud the newspaper scene (on pages 82-83) from Quake! Disaster in San Francisco, 1906. Tell students that this scene is based on a real event: The three city newspapers did combine staffs and issue a joint newspaper containing these headlines!

Ask students why it was be important to write and distribute a newspaper in the midst of a disaster - when people were in urgent need of food, shelter, and medical care. (If the students need prompting, read aloud the rumor scene on pages 59-60.) Why do people circulate rumors and exaggerate bad news during a disaster? (On page 63, Frank Alexander offered one explanation: “Misery loves company, don’t it? Here we are – wonderin’ if anything’s gonna be left of our city after this fire has burned itself out. And people are busy inventin’ stories about other cities in worse shape than us!”)

Tell students that they are going to produce disaster newspapers. Assign each student to a group of four or five. Distribute some current newspapers to each group. Tell students to examine these newspapers to make a list of typical sections, such as “editorials,” “features,” “weather,” etc. Put these on the board.

Have each group think of a name and design a masthead for their publication. Ask students how they could find details about San Francisco during the disaster. Where could they learn about the weather? About orders from the army?

Encourage the groups to come up with creative ways to incorporate art, such as photocopies of actual photos or cartoons, to make their newspapers look authentic and interesting.

Tell the students that they can conduct pretend “on the street interviews.” They might base these on eyewitness accounts. Or they might make up both questions and answers. They should attempt to capture varied viewpoints in their interviews. As an example, read aloud the bread line scene (pages 99-101) in Quake! Disaster in San Francisco, 1906. How would a Chinese man feel about the distribution of relief supplies in Golden Gate Park, as opposed to an Italian man?

After the newspapers are finished, designate class time for a “reading room.” Have students circulate and read the groups’ newspapers. (If several classes are working on this activity, let the students read newspapers produced in the other classes, also.)

(Optional: Encourage students to notice successful and creative work produced by other groups. List some categories on the board, such as “Best Investigative Reporting,” “Most Persuasive Editorial,” “Most Attractive Masthead.” Have the students nominate candidates for “Pulitzer Prizes” from the disaster newspapers.)

There are lots of resources available for extending your study of earthquakes and San Francisco’s Great Disaster. For suggestions about books, see the Author’s Note at the end of Quake!

Hey! Check out this way-cool video, made by middle school kids, and watch carefully - at the end, a kid holds up Quake!   Gotta Keep Reading

National Public Radio - “Remembering the 1906 San Francisco Earthquake”
http://www.npr.org/templates/story/story.php?storyId=5334411
Read or listen to an article that revisits the Great Disaster.

“The Virtual Museum of the City of San Francisco”  www.sfmuseum.org
This is a treasure-trove of photos, eyewitness accounts, official reports, and info.

Return to Top of Page