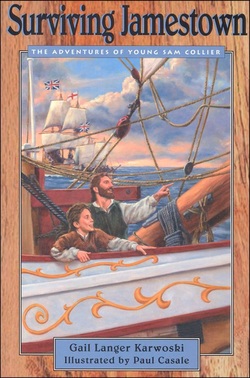 Introduce this lesson by posing the question:  How do historians find out what happened? (Possible responses: They examine artifacts, examine skeletal remains, look at artwork and writings.)

Put the term “primary source” on the board or overhead.  Tell students that when an event is recounted by a person who was there to experience it, this document is called a primary source. Primary sources take different forms:  letters, diaries and journals, newspaper accounts, census and shipping records, autobiographies, etc.

Contrast primary sources with secondary sources - accounts written after the actual event has taken place, such as biographies, textbooks, etc. Which is more accurate?  (Students may assume that primary sources are always reliable.  Point out that writers of primary sources may have political motivations for distorting truth. Eyewitnesses may misinterpret facts because of their limited knowledge of geography, foreign languages, customs, etc.)

Some well-known historical novels (like Pam Conrad’s Pedro’s Journal and the Dear America series) are fictionalized versions of primary sources. Tell students they are going to create their own fictionalized primary sources based on  Surviving Jamestown: The Adventures of Young Sam Collier (Atlanta: Peachtree Publishers, 2001).

Note: The Jamestown colony is particularly appropriate for teaching with primary sources because it’s easy to find eyewitness accounts written by these early settlers. All of these accounts are collected in Jamestown Narratives: Eyewitness Accounts of the Virginia Colony, The First Decade: 1607-1617 by Edward Wright Haile (Virginia: Roundhouse, 1998).

Have students scan Surviving Jamestown: The Adventures of Young Sam Collier to search for an episode that intrigues them. (Suggestions: catching songbirds in the West Indies; the assault by Native Americans when the ships first landed on the shore of the James River; the Indian ambush on the settlement; the fire; John Smith’s gunpowder injury; etc.)

Have students choose three of the book’s characters and rewrite this episode in first-person from each character’s point of view.  These character’s accounts should reflect their varying knowledge levels (Was this character a participant in the event, or did he hear about from another? Is this character knowledgeable about medical terms, say, or able to understand the Indians’ language?). The accounts should also reflect the character’s feelings, opinions, and distinct “voices.” (Some characters might write formal prose that reflects their higher status and education level. Others might have a simpler vocabulary, like that of a servant or child.)  These accounts may take the form of either diary or journal entry, letter, or autobiographical narrative.

Have the students share their work by reading aloud. (If the whole class is familiar with the novel, you might let the other students guess which character wrote each of the accounts.)

__Do you realize that you have a “high-tech” puppet stage in your classroom? It’s your overhead projector! Here’s how to create a budget puppet show that looks like a million bucks ...

Have the students work in groups of 2-4. Tell them to scan Surviving Jamestown: The Adventures of Young Sam Collier to choose an episode that intrigues them. The best choices would be incidents that are dramatic and central to the story.  (Note: Encourage each group to choose a different episode.) Tell each group to write a short play for 2-4 characters from their episode.

Give out transparency sheets and a set of Vis-a-Vis markers to each group. Students will draw and color the backdrop for their play(s) on these sheets.  Use one sheet per setting.  (The student art will glow like stained glass windows when projected!)

Have students make “rod” puppets by drawing a silhouette of each character and cutting this figure out of stiff paper, such as an old file folder. The puppets should be no taller than 3-4 inches. Using glue or tape, attach each silhouette to a popsicle stick, soda straw, disposable chopstick, or even a pencil.

As the students read aloud the lines of the characters in their plays, they should manipulate their rod puppets against the backdrop.  Let each group practice with the overhead projector.  Then stage a production for another class.  By performing the scenes in order, your class will present the complete history or tell the complete story of a book.

Note: If you need a program for parent night, this works beautifully.  You can also use overhead projector puppets/backdrops to  “book talk” to your students.

Extending the Experience Through Research

Establishing a colony in North America was both difficult and dangerous. After students read Sam Collier’s story, they may be excited about learning more about this period.

Sam Collier stayed in Jamestown after John Smith returned to England.  Sam remained in the colony until his death during the winter of 1622-23. Research what happened in Virginia between 1609 and Sam’s death. Write a new last chapter for Surviving Jamestown: The Adventures of Young Sam Collier.

Jamestown was the seat of colonial government until 1698.  Make a time-line of the major events in the colony’s history, beginning with its establishment in 1607 and continuing through 1698, when the government of Virginia was shifted to what became Williamsburg.

Research the establishment of the Massachusetts colony in Plymouth. Write an essay to compare these events with those in the founding of Jamestown.